Warning: For Adults Only

The following website, including all webpages, links, images and videos, display sexually explicit material. Only consenting adults are authorized beyond this page. If you are a minor (under the age of 18 years or 21 years where 18 isn't the legal age of majority), if sexually explicit material offends you or if it's illegal to view such material in your community, you MUST leave this by clicking LEAVE SITE above. By clicking ENTER you agree to the statement at the bottom of this page.

By entering this site you agree that: 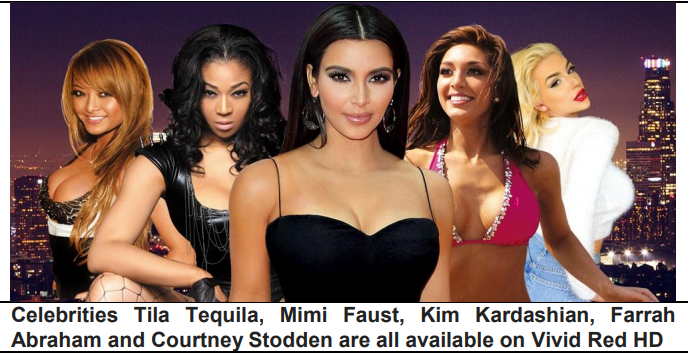 Leading Polish pay-tv operator Cyfrowy Polsat, and the largest Slovenian IPTV operator T-2 will be amongst the first to introduce Vivid Red HD, on 1 January 2018. Several other operators in Europe will launch the service in the first quarter of the year.

Vivid is the world’s most award-winning adult film company, earning international headlines for sex tapes showing the escapades of famous celebrities such as Kim Kardashian, whose huge success has been attributed in part to the best-selling video Kim Kardashian Superstar. Among many other stars in the VividCeleb collection are Farrah Abraham, star of MTV’s Teen Moms OG, plus Kendra Wilkinson, Pamela Anderson,Tommy Lee and many more.

Vivid is constantly approached by famous European celebrities eager to market their own sex tapes and the company anticipates that it will be featuring some of this exciting content on Vivid Red HD in the near future.

The Vivid brand is firmly established in more than 50 countries and the company is quickly becoming the leading adult entertainment provider in Europe with linear channels such as Vivid TV Europe and Vivid Touch, now joined in January by Vivid Red HD. In addition, Vivid on Demand has grown dramatically over the past year across Europe, with a large number of operators taking advantage of a tailored VOD Celebrities Tila Tequila, Mimi Faust, Kim Kardashian, Farrah Abraham and Courtney Stodden are all available on Vivid Red HD service. Vivid also has the exclusive broadcast rights to Kink.com BDSM movies in Europe.

Vivid was founded in 1984 by Steven Hirsch, its current co-chairman, credited by Adult Video News with having “single-handedly moved adult entertainment into the mainstream.” It has the largest film archive of any single studio in the adult industry and has won more awards for excellence than any other company.

About Vivid: The Vivid brand is built on high quality films and innovative marketing and has been in business for over 30 years. Vivid’s divisions include fast growing broadcasting with Vivid channels and VOD platforms broadcast around the world and the Internet with its newly updated website Vivid.com and which now includes many other sites and the complete celebrity sex tape library. Licensing programs extend from condoms to gentlemen’s clubs. For more on Vivid visit twitter.com/VividCorp or Facebook.com/Vivid.